Peer-review: not peer-reviewed yet!

Warm temperatures in winter with no snowfalls it means no snow for powder days… So what?

Due to a decreasing amount of snow in alpine regions in winter, most ski areas are dependent on artificial snow nowadays. Starting with its production, artificial snow differs from its physical properties to natural snow. Artificial snow has a longer resting time in contrast to natural snow, because it melts more slowly. That’s the reason why the vegetation period starts later, which influences the carbon cycle strongly. Moreover we have to keep in mind that artificial snow has to be produced and distributed. These processes boost the release of CO2-emissions and heat.

To sum up, we assume that artificial snow has another influence on the affected ecosystems as well as on the climate in a wider sense than natural snow.

While browsing through our homepage, many questions will be answered according to the difference between artificial and natural snow. If anything is still cloudy, feel free and contact us (https://transparency-lecture.github.io/)

The ski area „Patscherkofel“ is the local mountain of Innsbruck’s skiers and serves as our study site for nearly two months. It is located only a few kilometres away from Innsbruck, the capital city of Tyrol. Patscherkofel lies with 2246 m a.s.l. in the Tuxer Alps.

In cooperation with the Patscherkofel’s administration the study site was chosen and the examined area was marked to ensure safety for the skiers.

The following case study deals with radiation data from two meteorological stations, which are first situated on natural snow. One of the stations is later moved on a ski slope, which is partly covered with artificial snow.

We chose this ski area, because it is easy to reach with the public transport system from the city and the surrounding villages. Not only the reachability, but also the infrastructure of the ski area, was a reason for choosing this place. For the construction of the stations a huge amount of material had to be carried on the mountain. In the first half of the measurement time (till the ski area was closed), the cable car could be used. After that the study site was reached by hiking or ski touring. 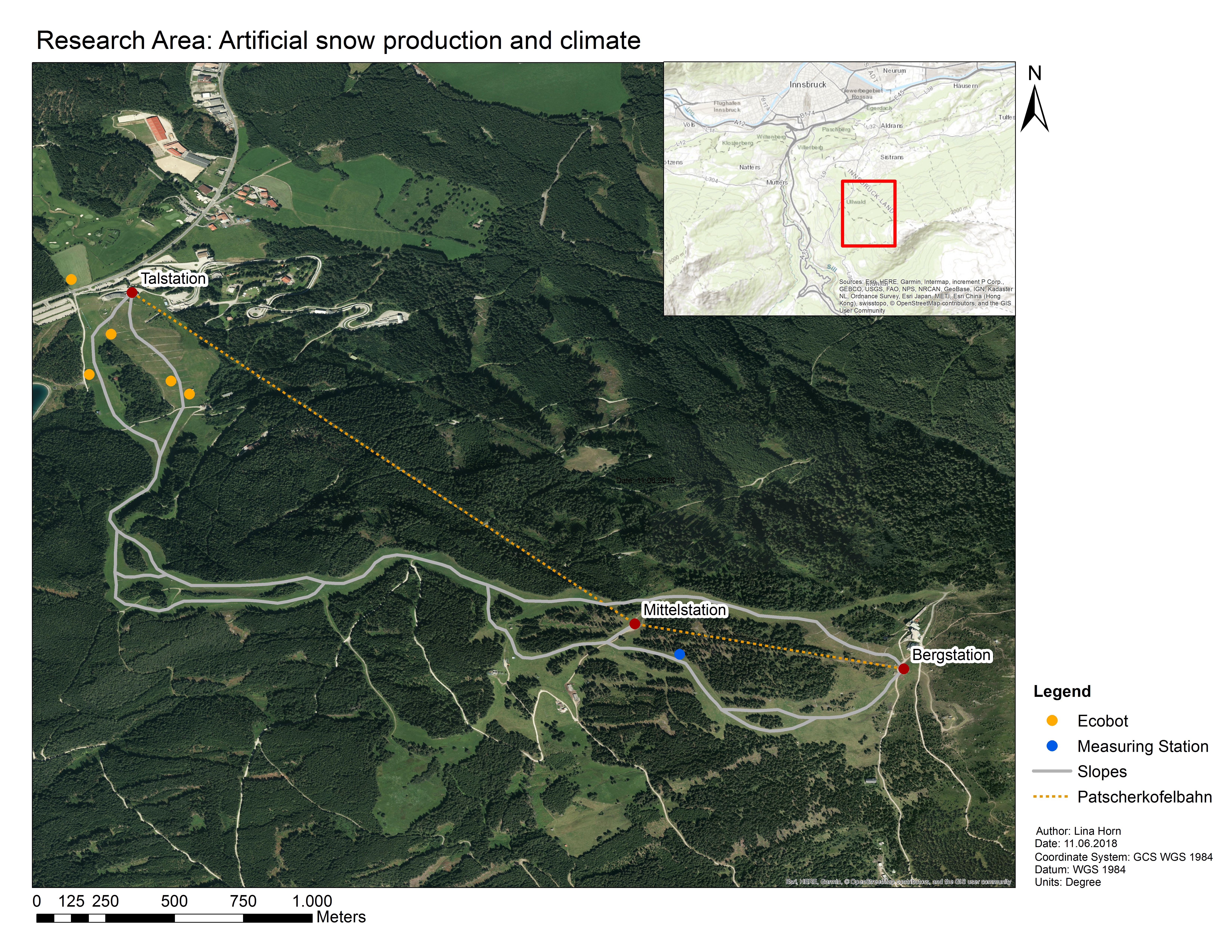 How does artificial snow influence our climate, especially in the alpine area? Interesting question nowadays, don’t you think so?

For answering our research question, we used three different ways to receive data. First of all, the main data comes from our two meteorological stations at Patscherkofel.

The meteorological stations (AWS1, AWS2) were built up near the ski slopes of Patscherkofel at 1800 m a.s.l. They include a measuring device for long- and short-wave radiation. Data was measured from the 23rd of March till the 15th of April 2018. After the ski area closed for skiers, AWS2 was shifted on the 6th of April to the slope, which is partly covered by artificial snow without changing level and orientation.

Secondly, to investigate the ski slopes more intensively, we used the Ecobot. It is a mobile system for quantifying the spatial variability of the surface energy balance. In addition to radiation values, we perceived NDVI-data, the wind speed, air temperature, GPS data…

Historic data, which also includes long- and shortwave radiation, from the weather station in Neustift (994 m a.s.l.) is available from 2011 until 2017 and was used to investigate the differences between grassland albedo values and snow albedo values. It provides further insights into the transition period when the snow melts in spring until the ground is snow-free (relation between snow and radiation).

Finally we connect all the received data for answering our main research question.

For further research, we should keep in mind to investigate the affected ecosystems and the production and the distribution of artificial snow more closely. It would be helpful to cooperate with the administration of Patscherkofel to receive data of the electricity and water consumption.

Albedo, radiation, climate change… Words, which sound in fact familiar for many people, but actually they do not understand its scientific meaning.

So the main challenge for the scientific world is to work transparently and understandable for the public. The scientific knowledge should be spread around the world, especially with new communication media. For that reason students, as prospective scientists, should be able to work with it correctly and learn how to communicate coherently with non-scientists.

New communication media platforms like Github (https://github.com/) allow an interaction between the scientific societies around the world and the public. All internet-based steps will be saved and accessible. Scientists use it to comment on scientific progress, new data as well as on methods and to keep each other updated. But all changes, comments and corrections are reasonable and traceable by each person, scientists and non-scientists.