Code used to generate these plots

Data used to generate these plots:

Two automatic weather stations (AWS) were mounted in the skiing area of Patscherkofel on 23rd of March 2018 to investigate whether artificial snow has an impact on the change of reflectivity of shortwave radiation and consequently an impact on the surface energy budget. For this purpose two CNR4 Net Radiometer were installed, which measure the incoming and outgoing longwave and shortwave radiation. First, both were placed in natural terrain on snow next to a ski slope. On the 6th of April 2018, one station was moved onto the ski slope. The measurement period was from 23rd of March until the 9th of May. It has to be mentioned that there was a huge amount of natural snow in this winter and we do not know how much artificial snow actually was produced, so it is hard to quantify how strong the effect actually is.

Quality check of the Data and Methods

Due to some battery problems the examination of the data starts with the 28th of March. In figure 1 the incoming and outgoing shortwave radiation of both stations are plotted. The shortwave radiation follows the typical daily cycle we would expect. For every time step the albedo was calculated by dividing the outgoing by the incoming shortwave radiation. Some albedo values were higher than 1 which is physically impossible. One source of error are disturbances of the upper sensor, which was sometimes covered by snow. Additionally, the lower sensor receives more shortwave radiation in the morning when the sun has a low elevation angle and radiates directly into the lower sensor. These values are excluded from our analysis. As these instant albedo calculations for each data point are very sensitive to measurement errors, e.g. extreme peak by a single measurement, it is better to analyse the daily albedo. For the following it was calculated by summing the outgoing and incoming radiation over each day and dividing these two quantities by each other. 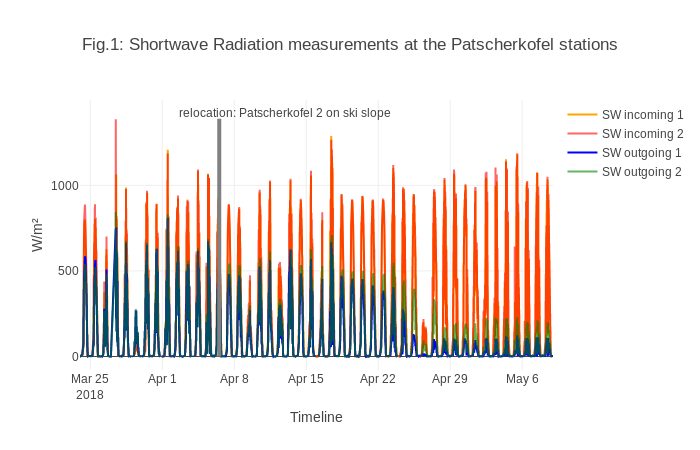 Figure 2 shows the daily albedo of both stations for the measurement period. As we can see, the albedo exceeds 0.7 until the 1st of April, then metamorphosis changes the properties of the snow and the albedo decreases to values between 0.55 and 0.7 for a period of 15 days. The variations in this time span can be explained by the change between new snowfall (4th, 8th and 12th of April), which leads to higher albedos, and warm temperatures that induce transformation processes in the snow. When melting occurs, a layer of water covers the snow, which has a lower albedo than snow (Mote, 2008).

Afterwards, from 16th of April on, the albedo decreases continuously until the snow is completely melted. A period of hot days in comparison to the days before started. The albedo reaches values below 0.2, which belong to snow-free surfaces (according to the analysis of the Neustift data). The photos of the dismounting show a muddy surface for Patscherkofel 1 and pasture for Patscherkofel 2. 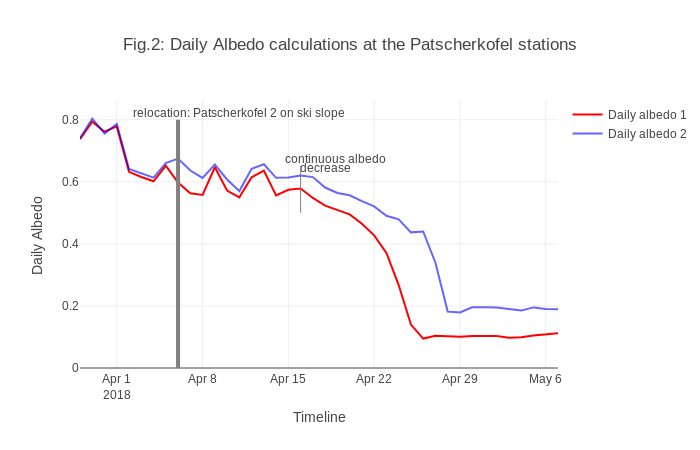 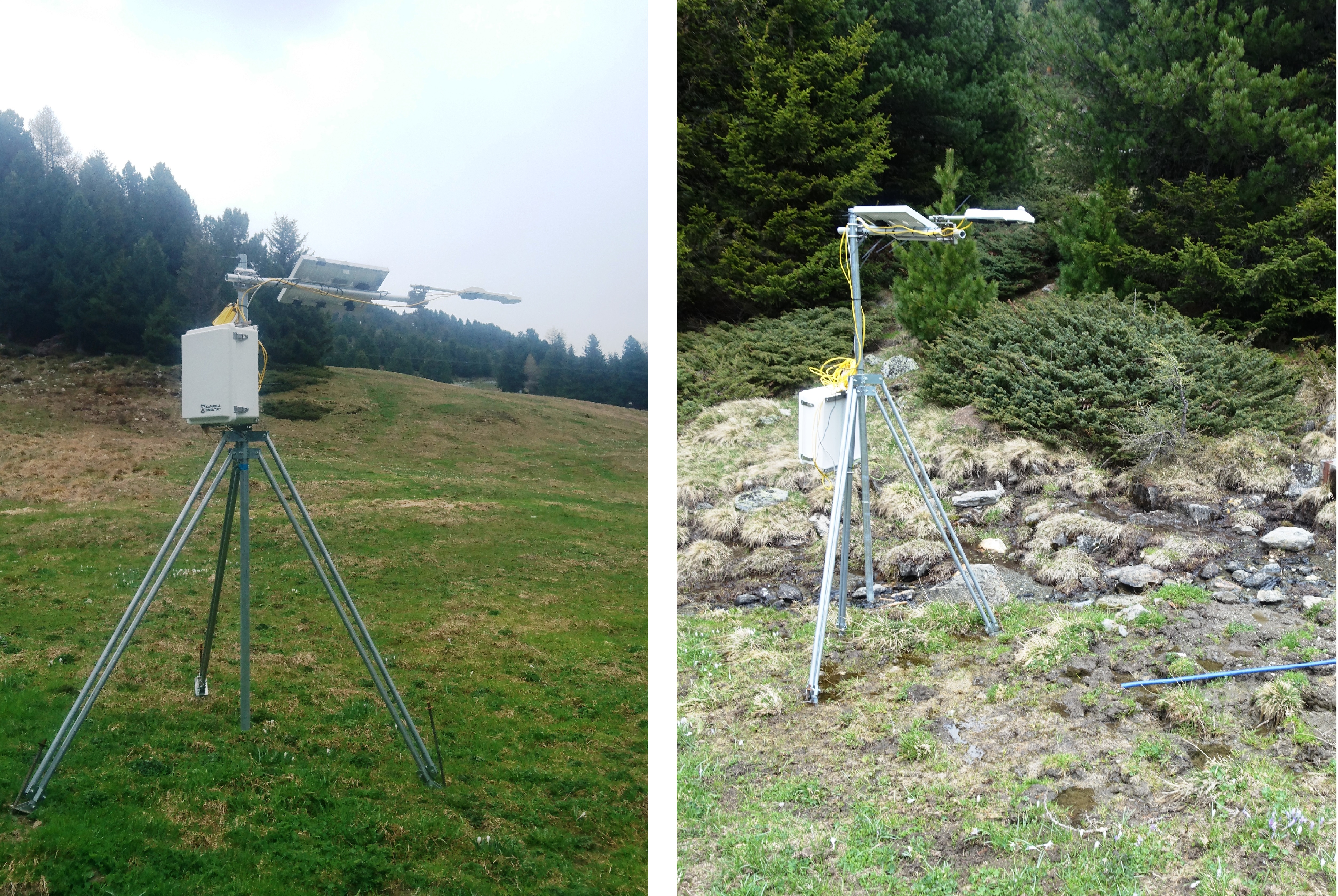 Until the 5th of April the albedo of both stations is nearly identical. With the relocation of Patscherkofel 2 on 6th of April they start to differ. This could be explained by the expected differences of the snow properties (artificial snow vs. natural snow), which is supported by the fact that both station show the same albedo at the 9th of April after a large snowfall. This day can be seen as a reset where both stations start again under the same conditions. They begin to differ directly after it. Different properties could be the snow grain size or transmittance. Mote (2008) describes that a larger grain size leads to a higher albedo. Since we did not measure these quantities, we cannot evaluate their influence. However also possible technical problems have to be considered, which could occur due to the relocation, as well as differences between the sites. The station that is located on the ski slope reaches its minimum albedo two days later than the other one. There are a few aspects to be taken into account. The snow on the ski slope should be denser due to the skiers that compress it, and in addition due to the heavy snowcats that distribute extra artificial snow on it. Therefore the decrease of the snow height by melting is expected to be slower compared to the natural site since more energy per square meter is needed to melt the same height of the snow. There were also a few skiers in the area of natural snow, but their impact is considered to be little. Further the albedo is lower on Patscherkofel 1 (natural site), therefore more energy is absorbed by the snow, which is used to melt it faster. Unfortunately the stations were installed on different types of grounds. The station on the ski slope was placed on a pasture whereas the other one stood very close to a small stream, where the ground was wet and muddy. The darker muddy ground of Patscherkofel 1 has a lower albedo (0.1) than green pasture on Patscherkofel 2 (0.2). Brock et al. (2000) explains that the underlying albedo influences the snow albedo when the snow height is below 0.5 cm w.e. . Therefore the melting at Patscherkofel 1 should be faster since its underlying albedo is lower. We cannot prove this assumption, because we do not know the development of the snow heights. Moreover it has to be thought about the fact that with the flowing of the river a melt process from underneath the station could have taken place. We are not able to know the degree of the influence on the overall melting process. But this could be another reason for Patscherkofel 1 being snow-free 2 days earlier.

The transition zone between snow covered and snow-free ground is easy to identify in our case, since there did not occur snowfall events after the complete melting of the snow. This process was fast and without interruptions.

With our measurement we detected a difference in the behavior of the snow on the skiing slope compared to the nearly undisturbed snow beside it. This difference could be caused by the use of artifical snow. The ski slope’s snow showed a slightly higher albedo until the continuous melting period started on 16th of April (between 1 % to 11 %). The site of natural snow was snow-free sooner, but only by two days. Probably, this is due to the lower albedo value at the beginning of the continuous melting period.

The main problem is, that we do not know the mixing ratio of natural and artificial snow on the ski slopes, and therefore an evalutation of the influence of artificial snow on the energy budget is impossible. A winter with less snow would be easier for the analysis. Further the differences of the snow properties are not clear, besides the density that should be higher on the ski slope as explained before. But according to Brock et al. (2000) the density should not have a significant impact on the albedo. In addition, the measurements are only point measurements. It has to be considered that there are differences in the sites, which are due to amount and number of snowfall, aspect, cloudiness and shadowing.

In further work it would be important to use also sites where the artificial snow stays significantly longer than the natural. At least the snow height of both stations and a density profile at the relocation date should have been measured. Then it could be determined whether the delay in the melt process is due to the albedo, the density or the different snow heights.